Ladies and gentlemen, we are proud to present to you our first beta release of OpenLP 2.2. This new version,two years in the making, is packed full of new features, bug fixes, and improvements.

We realise that this may not contain all the new features that people are looking for, but we're hoping to speed up the number of releases we make to around two releases per year. We're hoping in this way to be able to include more bugfixes and have a faster and more reliable release schedule. This way you don't have to wait 4 years for every new release, but there will be fewer new features per release in order to achieve this.

OpenLP 2.1.1 is not backwards compatible with 2.0.5. Once you have upgraded from 2.0.5, version 2.0.5 cannot read the upgraded files. OpenLP 2.1.1 will make a backup on startup, but it is recommended that you make your own backup too.

Upgrading from versions of OpenLP before 2.0.5 are not supported. You need to upgrade to 2.0.5 first, and make sure you run OpenLP at least once before continuing to upgrade to 2.1.1

This is a beta release, which means it is not yet finished and likely to still contain a few bugs. Please test it out as much as you can (using a Portable build on Windows is a good way to do this) and report the bugs you find.

OpenLP's system requrements have been upgraded since the 2.0.5 release. Please take note:

One of OpenLP's long-time users and advocates, Wesley Allen, is part of a great podcast/Hangout-on-Air called Theotek. In their most recent episode, they talked about a number of things, including OpenLP. Check out the video below! (The OpenLP review starts at 16:50)

No, we're not stopping development. No, 2.2 is still going to be released later in the year. No, OpenLP the project is not coming to a close, don't worry.

We're happy to announce the release of OpenLP 2.0.5, "Proselyte Paulus." This will be the last release in the 2.0 series of OpenLP.

Bugs fixed in this final release:

As per usual, you can find the release on the Download page. If 2.0.5 isn't available for you, please try again in a day or two, some of the packages take a little while to be processed.

The next release of OpenLP will be version 2.1.1, which will be the first beta version of OpenLP 2.2.

Therefore, if anyone is in Christ, he is a new creation. The old has passed away; behold, the new has come.

[ Image Credit: End of the Line by Kevin Gessner ]

OpenLP 2.0.4 has been out for 4 months now, and while there don't seem to be any major issues with it, that doesn't mean there are no more bugs. With this in mind we're going to be releasing version 2.0.5 at the end of this month, June. This will be the last release of OpenLP 2.0.

Once 2.0.5 has be released, we will be gearing up for the release of 2.2. As a part of this we will be starting up the nightly builds again and we will release a beta at the end of August with a view of releasing 2.2 at the end of October.

In order to reduce the time between (major) releases, the OpenLP team has decided to move to a release cycle more like Firefox and Chrome, with short cycles and a smaller number of features in each release. With fewer features in each release there should also be fewer bugs, and a faster cycle should mean that bugs are fixed sooner too.

We have also started writing automated tests for OpenLP, which should help to curb some of the bugs before they make it into our main codebase. Each developer is required to run all the tests against their code before they can submit it, and they are required to write tests for their code. This way our test coverage increases and we are able to prevent regressions (when new code breaks some of the older code).

Recently, Raoul (the project leader) was interviewed by church media expert Chip Dizárd about OpenLP and open source software on his Amazing People Podcast series. If you'd like to hear Raoul's take on OpenLP, open source and the church, then don't hesitate to listen to the podcast.

Update: We are pleased to announce that we've had another large donation, which will cover the cost of the Mac Mini completely. Thanks very much for the generous donations! If you would still like to donate (it would be nice to get a Mac keyboard too), we're still accepting donations.

As awesome as OpenLP is, we do have a rather large weak point: Our Mac support. Presentation software integration doesn't work on Mac OS X, there are often multiple display issues, and we don't have a dedicated Apple/Mac developer.

The good news is that we've recently been given a large donation toward purchasing a Mac Mini. The bad news is that it isn't enough. We need another USD$150.

If you're interested in donating towards buying a Mac Mini, please contact us via support<at>openlp.org or come visit us in IRC and ask for the PayPal details.

Welcome to another bugfix release of OpenLP 2.0. This is a further release in the stable 2.0 series. While it might not look like much, we're hoping that this release will make everyone's lives just a little bit easier.

Bugs fixed in this release:

If anyone has had problems e-mailing either our support e-mail address or our bug reporting e-mail address over the last couple of weeks, we apologise for the inconvenience.

A few weeks ago we migrated some of our systems, including our web site, e-mail server and support system, to an new server for better performance and security. As smooth as the transition was, it wasn't 100% without error, and one of the small problems that we only discovered in the last 2 days was that some of our e-mails were not getting through to our new support system.

If you sent an e-mail in the last 3 or 4 weeks, and you never heard a reply from us (apart from an automated reply, perhaps), then please e-mail us again and we should now get your e-mails and be able to respond to your queries. If we still don't seem to be getting your e-mails, please visit us in IRC and let us know which e-mail address you sent your query to, and when you sent it.

Thanks for your patience, and your continued support!

A few days ago another open source church worship project called ExpoSong had to shut down. It seems to me that they had a very small development team and were unable to continue developing their software. ExpoSong's last release was over 2 years ago, in December 2011, and I can only presume they took a rain check as 2014 came round and decided to officially stop the project rather than leave it hanging.

It's very sad when an open source project has to shut down, but I can completely understand their position. Without time or resources to continue development, it is better to officially stop development rather than leave it open in the dwindling hopes that someone may have the time to continue at a later stage.

For those of you who have come from ExpoSong, I have put together a step-by-step guide below to show you how to easily export all your songs from ExpoSong and import them all into OpenLP.

Exporting Songs from ExpoSong and Importing Into OpenLP

Then select where you want to save your library file to. 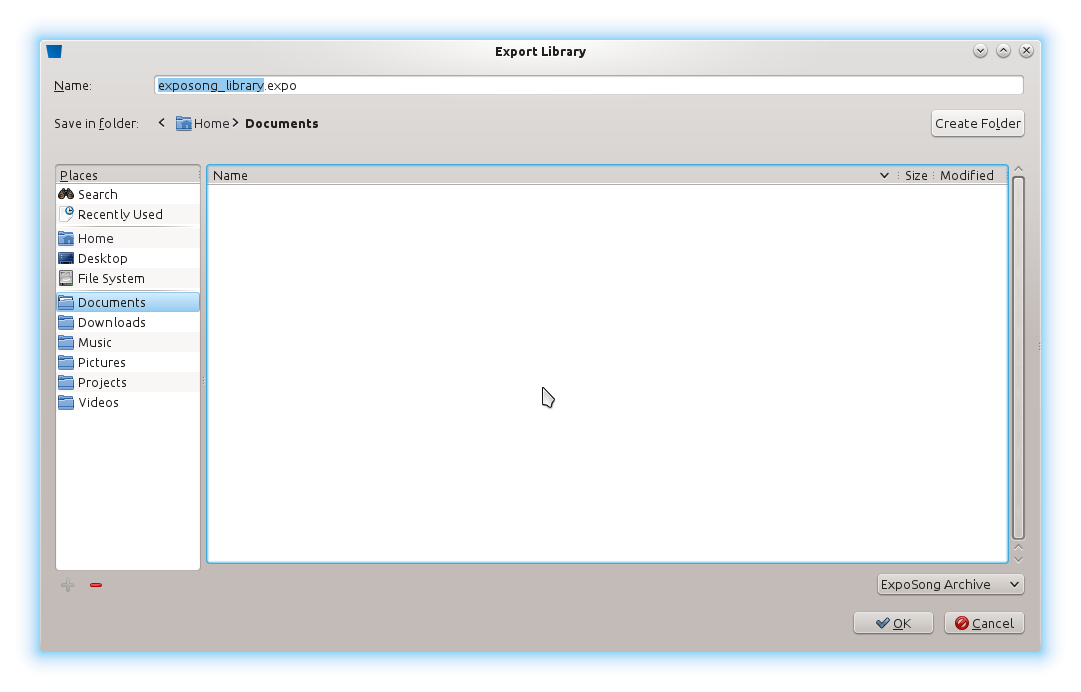 Once you have saved your file, open your file browser and navigate to where the file is. 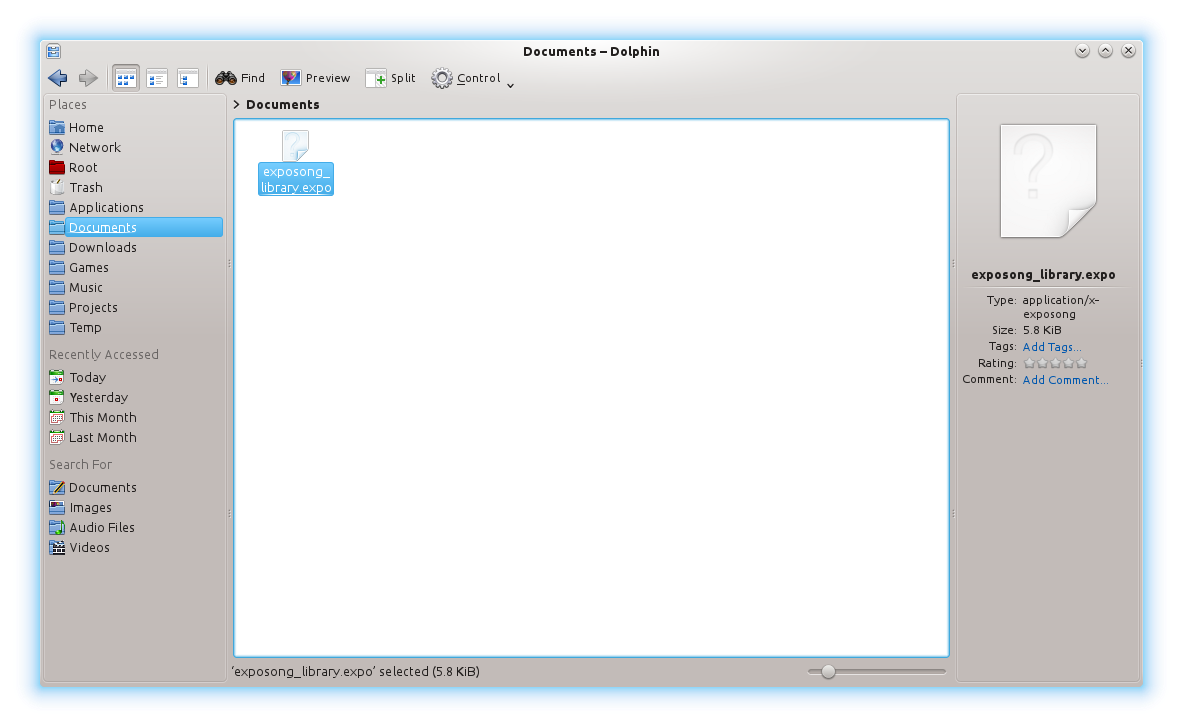 Select the file and rename its extension from ".expo" to ".tar.gz" 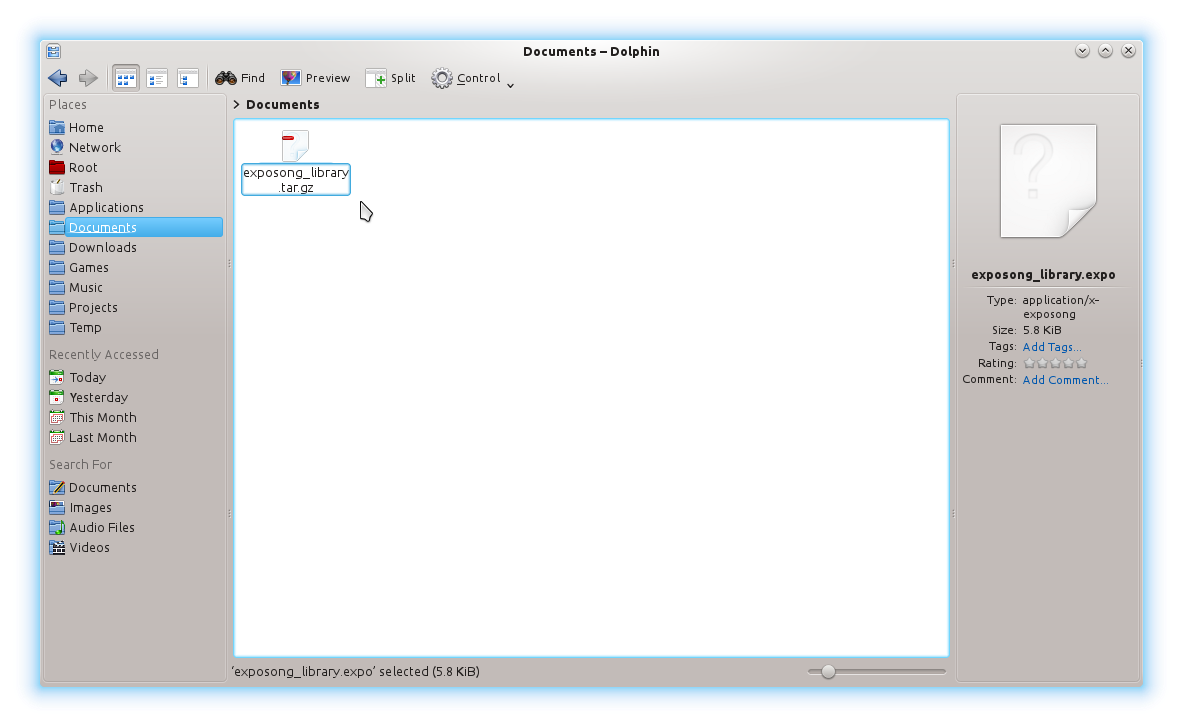 Now you should have a "tarball" in your directory. 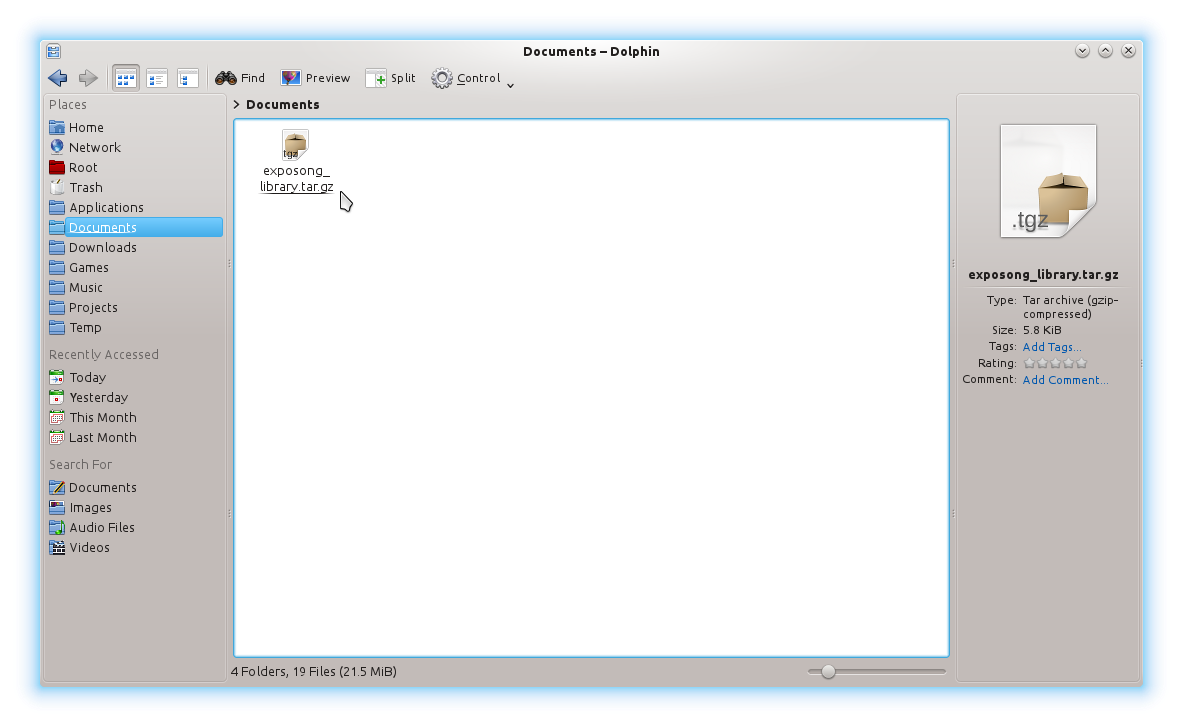 Using an archive program (Windows users can use 7-zip, unzipping should be built in on Linux and OS X), extract the contents of the "tarball". 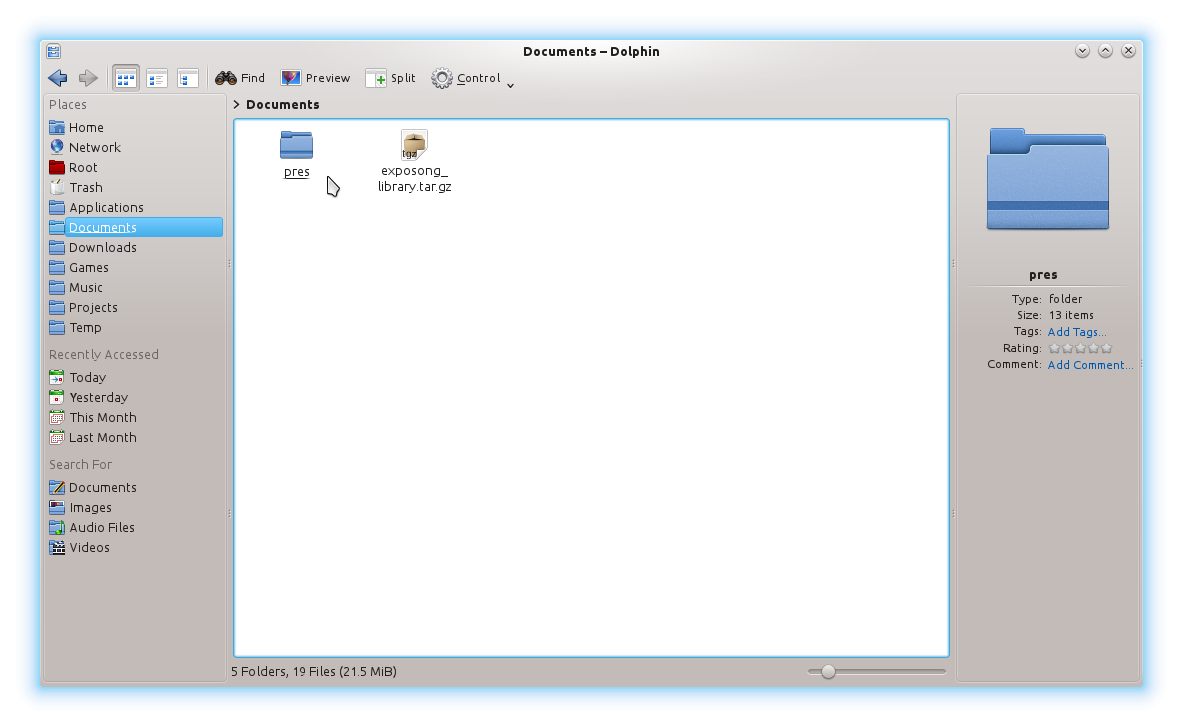 If you enter into the extracted "pres" directory, you should see all of your songs stored as ".xml" files. 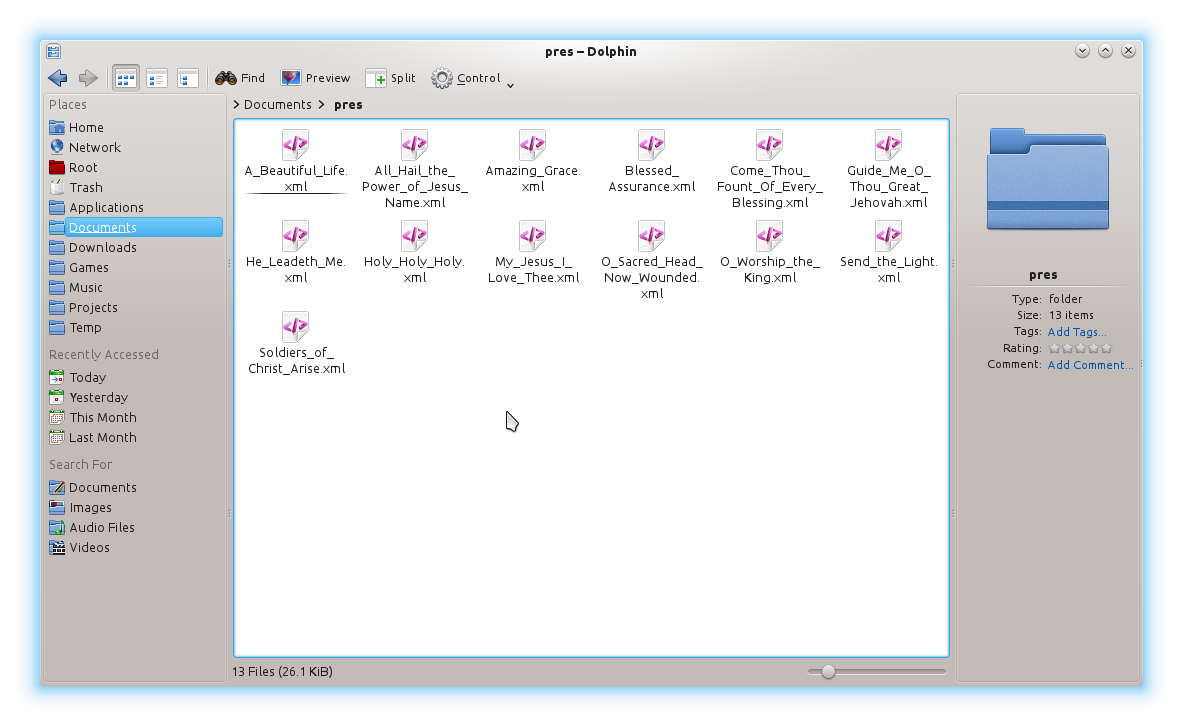 Now go into OpenLP, select File > Import > Songs and when you get to the Song Format page of the Import Wizard, select OpenLyrics. Then use the "Add Files" button to find the files you just extracted and add them to be imported. 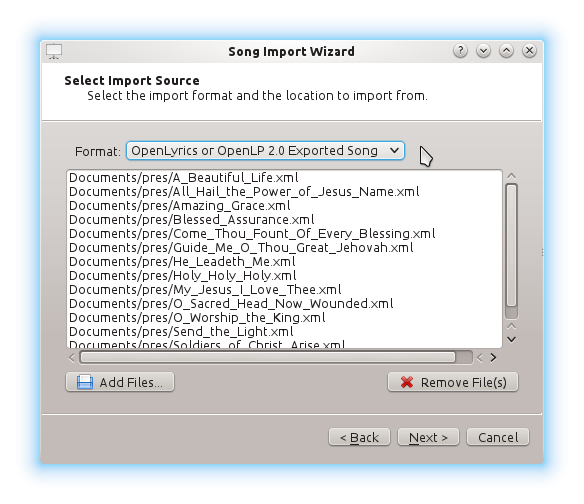 Follow the rest of the prompts in the wizard to finish importing your files.

We have finally had some time to sift through the responses to the survey, and below I present to you the summary of the survey. There are some pretty graphs (for those who like graphs) and we've included the percentages of multiple choice questions. Note that due to most of the questions allowing more than one answer, the sum of the percentages will exceed 100%.

And so, without further ado, here are the results:

How did you originally hear about OpenLP? 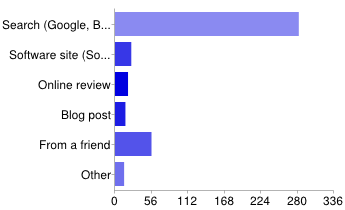 Which services do you use OpenLP in? 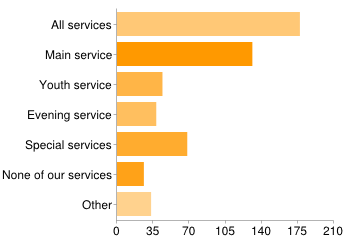 What do you currently use OpenLP for? 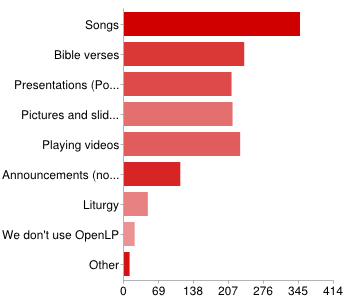 What operating system do you use OpenLP on? 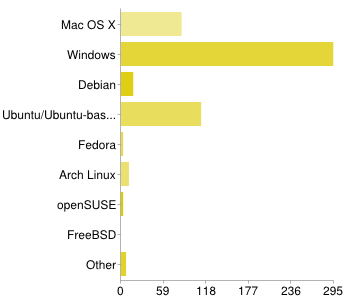 What other software do you use in addition to OpenLP? 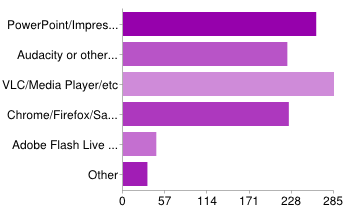 What do you love about OpenLP?

For this question, we had to manually work through everyone's responses, and pick out the most common themes. These are the top 5 themes we noticed, in order of most-mentioned to least-mentioned.

There were also a number of enthusiastic users of the remote and/or Android app.

We also noticed that some folk thought that OpenLP is donateware. It is not, we haven't publically accepted donations for a few reasons, mostly that we don't see the need. If you would like to donate, please e-mail us (contact form).

What do you dislike about OpenLP?

Once again, we had to manually work through everyone's responses, and pick out the most common themes. These are the top 5 themes we noticed, in order of most-mentioned to least-mentioned.

We noticed that there were a large number of bugs that we've never heard of. If you do encounter a bug, please let us know! We can't fix it if we don't know about it.

There were also a lot of "missing feature" complaints, which were almost all already in the list of features we're looking to implement, and thus we did not include them in these results.

We couldn't help but notice that a few of the respondents indicated a willingness to help develop OpenLP in some way. If you're keen to take a look at helping out, please see our getting started page on the developer wiki and join us in IRC so that we can help you get up and running.